1. They offer a physical, “human” visual deterrent from theft.

The number-one reason why folks go for a security guard over more “high tech” (and possibly more effective) security options is the comfort of a physical presence onsite.

Any security system will involve advertising its presence onsite to alert criminals that a potential target will be a hard nut to crack. The presence of an alert, attentive, and reasonably fit security guard serves the same purpose.

If a security guard catches sight of a trespasser while on-duty, he or she can approach to resolve the issue.

For common trespassers like teenager hooligans or homeless folks, security guards can offer a stern—yet compassionate—deterrent. For those with more nefarious intentions, the approach of a security guard can be their cue to run.

Security guards provide a unique public relations opportunity for your business as uniformed representatives (or direct employees). Given the right training, security guards can be another weapon in your customer service arsenal. They can be yet another smiling, helpful face to boost the experience of visitors and prospective customers alike.

1. Modern live video surveillance systems offer many of the same advantages—without the large retainer or paycheck.

There’s very little security guards can do that modern live surveillance systems can’t replicate at a fraction of the cost.

Video cameras placed in high-visibility, public areas provide the same visual deterrent that a security guard does, without the same salary requirements that a human presence necessitates. Not only that, but live video surveillance services like Eyewitness Surveillance’s come with audible deterrent from speakers, alerting any trespassers that their activities are being monitored.

Combine those features with unique marketing opportunities like Eyewitness Surveillance’s Sales Direct service, and a business can accomplish the same goals with live video surveillance that they could with a security guard for thousands less.

A physical security presence can mean personal injuries, both to the accused trespasser and to the security guard him- or herself. While most jurisdictions agree that security guards can use a “reasonable amount of force” to control the situation and resolve physical conflict, what would be considered “reasonable” is open to interpretation.

Such use of force by a civilian security guard could open them to liability for negligence or even assault. These lawsuits would be on top of any workman’s compensation the guard may file for in the case of injuries sustained during work.

On top of potential assault and battery, employers must also consider the risk for wrongful detention—if a guard holds back someone without cause—and damage to property, either their own or someone else’s.

These considerations and possibilities require expensive insurance to mitigate that financial risk and liability in the event of a worst-case-scenario.

Security guard protection is inherently passive. You have a few (at best) security guards simply waiting for crime to happen. However, that crime may not happen for hours, days, weeks—even years.

That sort of inactive boredom makes falling asleep incredibly easy to do, no matter the facility under protection. A few years ago, security guards at a United States nuclear power plant were discovered sleeping on the job. You’d assume that a government-run nuclear power plant would have the best of the best guards on staff to protect the plant.

Those guards at the nuclear power plant aren’t the only ones who sleep on the job. Check out this woman police officer who fell asleep at a memorial service in 2016 at which former President Obama spoke:

So, that story of a security guard falling asleep mid-shift due to inactive boredom might seem like a stereotypical joke. However, it’s a real, widespread problem within the security guard industry that directly impacts the security and safety of client companies and investments.

Conversely, remote live video surveillance is an incredibly proactive security measure. The remote security professionals here at Eyewitness Surveillance, for example, never have time to be bored, as they’re constantly monitoring incoming alarms from our live security feeds. They’re not waiting for something to happen; they’re constantly responding to the action occurring at every client facility. Our security professionals also work in large teams headed by supervisors to promote group accountability and activity. Finally, we know our staff doesn’t need to catch a few winks on the job, since our schedule ensures no one’s working themselves to exhaustion.

4. Security guards are “only human,” making them targets for attack.

People like patterns, and security guards are no different. Untrained guards will commit to the same routines day in, day out—and that creates a huge security risk for the company.

Smart thieves will watch security guards from afar, learning those routines and leveraging them for criminal advantage.

In a small group, a few thieves might learn the guard’s routine and steal when they know the guard is patrolling a different area of the facility.

In a larger group—or facing a guard who looks like he or she may offer little resistance—thieves may overwhelm a security guard. The news is rife with stories of guards becoming injured on duty:

Even robot “security guards” aren’t safe from attack—though this assault was carried out by a drunk man, rather than a thief.

Desperate people will do desperate things—including attacking security guards who stand between them and their targets. In these situations, security guards offer not a deterrent, but a liability to the company who employs them (and the building in which they’re hurt).

Should the worst come to pass and an altercation occur, it can be exceptionally difficult to uncover what happened, when, and to whom. In an attempt to save their own hides, criminals may lie to the authorities about what happened—and the security guard will only have their word to gainsay the criminal’s account.

Even in a best-case scenario in which everyone is trying to give accurate accounts of a given scenario, stress hormones like adrenaline can interfere with memory retention. Security guards may not be able to accurately recount what happened during intense situations, missing critical details that can help authorities track down criminals.

Video footage is fantastic for corroborating employee accounts with impartial evidence. It records what happens without considering those involved. So, even if you hire security guards, pairing it with a video surveillance tool—especially live video surveillance, in which the remote command center can alert onsite security guards of potential problems—secures not only your property, but also your guards.

6. Security guards could be complicit with the criminals they’ve been hired to repel.

Of course, the potential for employee theft exists at every company with every workforce. However, security guards are especially vulnerable to corruption by the criminal element, considering that they are often charged with security of assets and facilities when no one else is there. In essence, who’s securing the security guard?

In one of our investigations, we placed a Security Officer at the shipping dock of a large dairy. We discovered there was a very lucrative business underway among the Shipping Foreman, his assistant manager, two additional employees operating fork lifts, the Security Officer [whom we replaced with our own undercover operative] and several route drivers.

The client company was experiencing large inventory losses month after month, and couldn’t figure out how pallet loads of dairy products could simply disappear. [… There were] no vehicles being loaded [on the docks] other than company trucks, which were only being loaded under the watchful eye of the Security Officer who signed off on every shipping document, indicating the paperwork matched each pallet load of inventory.

Down in a small village just south of the United States border, a large cheese manufacturing operation was heavily dependent upon stolen milk and cream furnished by thieves from our client company; the operation involved not less than 4 pallet loads of heavy cream and 10 pallets of milk each week. Losses to the dairy supplying the stolen product ran into the hundreds of thousands of dollars per year.

When our Undercover Operative (“UC”) was initially approached, it wasn’t about getting involved in the theft ring; he was first “tested” with illegal drugs. After a few friendly conversations about smoking “pot,” a Shipping Department assistant manager named Steve offered our UC a “joint” as the shift ended on a Friday afternoon. […]

After our UC became engaged in receiving marijuana at work, only a virtual nanosecond later he was offered the opportunity to make some good “side money” by signing off on loads of stolen milk and cream.

7. Security guards can’t see the entire site at once.

This last point against using security guards as a primary security solution is a bit obvious, but stands to be repeated. Guards can only be in one place, doing one thing at a time. If crime occurs on multiple parts of the property—or a guard is distracted by something ultimately unimportant while a break-in occurs—then a guard would be unable to stop or delay a crime in progress long enough to summon police officers.

“Eyes in the sky”—or propped on light poles at strategic areas of the property—can cover virtually every inch of a secured area, and continue monitoring no matter what other activity occurs in another part of the property. 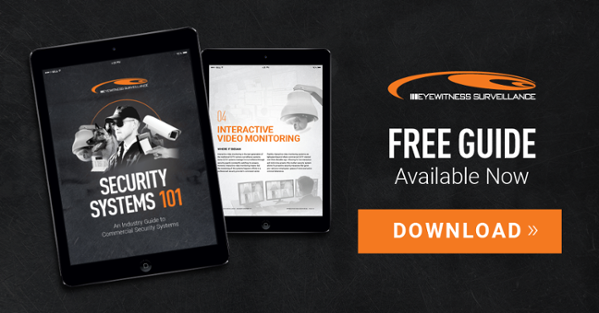 How can we
help
?

Do you have questions we didn’t answer in our FAQs page, or is there something else we can assist you with?